The prehistory of oil refining industry development in the Central Asian region began in 1868, when Russian industrialists Fedorov, Khludov, Zakho, Gromov and others made the first attempts to develop oil fields in the Fergana Valley, which were suspended for several reasons.

Later, Russian entrepreneurs tried to develop oil fields. Only in 1904, oil wells were opened, the oil production of which was so productive that the question of building their own oil refinery was ripe.

In the same year, construction of the Vannovsky oil refinery began under the leadership of railway engineer A.N. Kovalev.

In 1906, the Vannovsky oil refinery (now the Alty-Aryk refinery), which is currently a subdivision of the Fergana oil refinery plant, was put into operation.

Fergana oil refinery plant construction was dictated by the need to create at the place of consumption its own oil refining industry, and to continue the industry and transport development in general throughout the Central Asian region. The task of bringing the industry closer to the sources of raw materials and fuel to the regions of consumption was solved by construction of oil refinery near Fergana. Its uninterrupted functioning prevented a gap between the Central Asian and Kazakh regions' demand for oil products previously imported from outside, eliminating their long journey and the associated excessive operating and capital costs.

On January 27, 1959, it was decided to consider as an establishment day of Fergana oil refinery plant.

Further, in order to increase the oil refining depth and to treat oil products, as well as to produce associated components, in different years the following units were put into operation at the plant:

Since the Fergana oil refinery plant has shifted towards using local raw materials with high content of sulfur compounds in 1995, the plant has faced the task to preserve the range and quality of previously produced products, as well as to master new modern technologies, aimed at producing world competitive products. With due account for peculiarities of high sulfur raw material processing the Cabinet of Ministers of the Republic of Uzbekistan by the Decree No. 397 dated 12.11.1996 within the framework of the investment program with the involvement of European Bank for Reconstruction and Development EBRD and Export-Import Bank of Japan (JEXIM) has set a direction to retrofit the Fergana oil refinery plant in order to ensure quality of light oil products meeting the world standards and environmental improvement.

The retrofit project was implemented by the Japanese companies Mitsui and Toyo Engineering with the amount of finance exceeding 200.0 million US dollars.

With commissioning of the Diesel Hydrodesulfurization Complex (DHC) in August 1999, along with production of high-quality diesel fuel (sulfur content not exceeding 0.5%) the issue of reducing hazardous substances in the environment through construction of the associated DHC facility of elemental sulfur recovery unit was resolved.

Technical sulfur extracted from diesel fuel is in demand in the chemical and agricultural sectors.

State-of-the-art technology year on year imposes the more stringent requirements to the performance properties of oil products and Fergana oil refinery plant continues to build on its success, developments towards improving the quality of fuels and engine oils are constantly underway at our enterprise.

Over the past years, production of class D and E engine oils has been mastered. They have been successfully tested and approved for production and use. These are diesel engine oils M-8DM, M-10DM, M-14DM.

History of the trademark at the Fergana refinery

The first trademark certificate was registered in the State Register in 1993 on June 9 under No. 33 for the following goods and services:

The Black Drop trademark is associated with oil, refining and production of petroleum products. This trademark was valid from 1993 to 2016, for 23 years.
+ 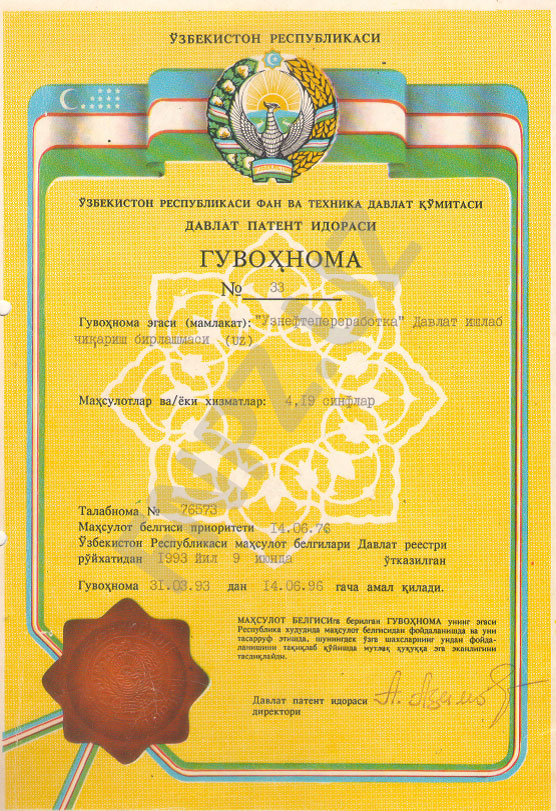 In accordance with the Law of the Republic of Uzbekistan "On Trademarks, Service Marks and Appellations of Origin of Goods" and the Rules of Compilation, on 08.07.2020, an application was submitted to the Intellectual Property Agency under the Ministry of Justice of the Republic of Uzbekistan from Fergana Oil Refinery LLC for the registration of a trademark service mark and mark.

After passing the examination of the claimed designation by the Intellectual Property Agency under the Ministry of Justice of the Republic of Uzbekistan, the trademark certificate was registered in the state register on May 4, 2021 under No. MGU 40345 for the following goods and services:
+ 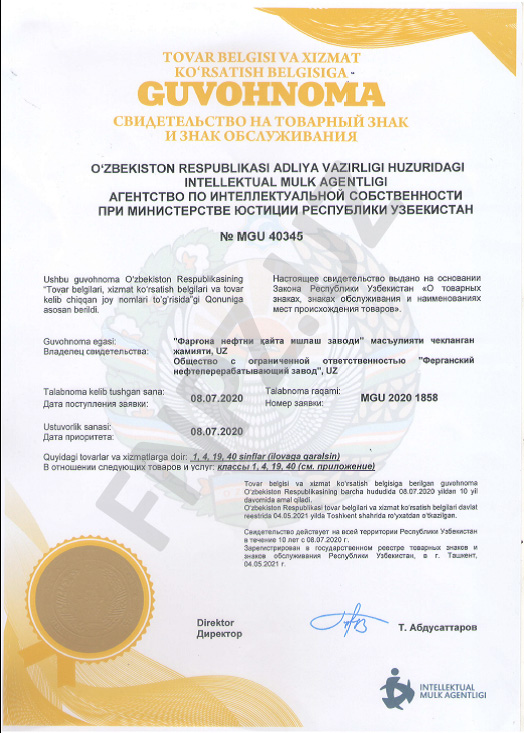 In accordance with the law "On Trademarks, Service Marks and Appellations of Origin of Goods", which came into force on September 22, 2001, legal protection of a trademark in Uzbekistan is provided only after its official registration.